Why Didn’t Anyone Tell Us It Was Going to Happen?

Similar to 2020, the year 2021 brought us a lot of surprises and challenges.  In the mix of all the issues we dealt with this past year, fall armyworms decided to add to the excitement.  Fall armyworms are a sporadic pest of turfgrass in North Carolina and most other areas as well.  In North Carolina there have been years where they show up in damaging numbers and other years where they are hard to find. They do not overwinter in North Carolina (nor in most other states) and each year we start all over again and last year’s problems (or lack thereof) provide us with no insight for the upcoming? year.

Fall armyworms overwinter most years in southern Texas and Florida and their northern migration can be influenced by weather patterns.  We do not have the ability to accurately forecast fall armyworm problems in advance, so most years they surprise us with their damage. They do not damage the turf when caterpillars are small, thus we typically find them when they are large and harder to control.  As I look back over the past 36 years of monitoring fall armyworm outbreaks in North Carolina and the Southeast in general, I am usually unable to predict whether it will be a year with only a few, or with major, problems.  When problems do occur, they are usually sporadic within North Carolina with scattered “hot spots” across the state.  This is one of the main reasons I discourage “preventive” insecticide applications over wide areas as I think it is not very cost-effective nor is it the most environmentally-friendly approach. 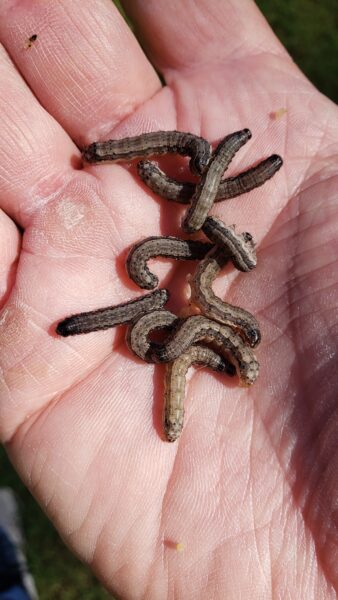 To summarize what happened in the eastern U.S. this year, just let me say that it was the worst outbreak of fall armyworms I have ever seen.  Not so much in North Carolina, but in other states, fall armyworm populations and damage were on a scale that was very surprising!  Areas of the upper Midwest and the Northeast suffered turf damage to both warm and cool season turf like they had never seen before. Some of the problems came from populations originating in Texas and some from moths that started out in Florida. These different “sources” potentially exhibit different traits for feeding preferences, like the damage we observed with seedlings and overseedings, and insecticide susceptibility.

I wish I had the ability to predict these outbreaks as I would be a more popular person amongst turfgrass managers. Even as the problem began grew in 2021, I did not realize this would be one of the worst years ever. The warm fall temperatures and lack of a frost well into the fall also kept the armyworms happy and allowed them to remain active for a longer time than usual.  No one saw that coming. Most people were not happy about the damage they saw in their lawns, on sports fields, and even where they play golf.  Why didn’t we know this was going to happen?  Like with many turf insects, forecasting fall armyworms damage and timing is tricky and difficult to predict.

I know many of you may have some customers or clientele who are really not happy with how this all went down this past year.  While there is always potential for fall armyworm activity in North Carolina, the likelihood for any specific home lawn of getting attacked is probably less than 1% in a given year. But this past year it happened. Who is to blame? Mother Nature as it provided the appropriate weather patterns that moved moths out of Texas and Florida and further north in numbers we have not really seen before.  Mother Nature who provided just the right environmental conditions for the caterpillars in new areas where eggs were laid.  It was, in a way, a perfect storm of pests and weather conditions that delivered a sort of knockout blow.

The reality is we may never see levels like that again in the next 25 years. I am not 100% sure, but I don’t think we should expect the same thing to happen in 2022.  Are fall armyworms getting worse over time? There appears to be some indications that is true, but that doesn’t explain 2021, nor predict what will happen in 2022. The change I have observed has been a slow, gradual increase.  Once areas other than South Texas and South Florida get some freezing temperatures, fall armyworms will be restricted to those warm locations and the whole process will have to start all over again.  I’ll give it my best to stay on top of the situation and keep you informed.