This has been an exceptionally busy year for fall armyworms so far and reports of damage are more numerous and widespread than what we have seen in the past. As a result, our lab has been flooded with phone calls, emails, texts and reports of fall armyworm damage, and with them, a lot of questions about these insect pests. I’ve put together the most important and pressing ones below (with additional management info at the end!) to help everyone dealing with fall armyworms. We will continue to keep an eye on the situation and post additional content as needed!

What’s the deal with fall armyworms, why are they so bad all of a sudden and will they be a bigger problem next year?

Like any other insect, fall armyworm populations (and subsequent damage) will fluctuate from year-to-year. When environmental conditions are just right, outbreaks can occur where we see numbers much higher than normal. It is difficult to predict in the moment exactly what is causing this surge to happen or if and when it will happen again in the future. However, it is important to remember that outbreaks can happen from time to time and that just because we are seeing a lot of fall armyworm activity this year doesn’t necessarily mean that it will be the same case next year.

I’ve never heard of fall armyworms before and now they seem to be everywhere. Did they just appear out of nowhere?

Fall armyworms have historically been a BIG issue in turf (Fig. 1) in the southeast (I routinely put them in my Top 3 of turf pests in NC) because they reproduce over several generations each year (you may have to make applications to control the larvae multiple times a season), they are active from June through October, and they are voracious feeders that cause a lot of damage very quickly. This year, we are seeing them in more areas and in much higher numbers so many more people are aware of them – but not because they didn’t exist prior to this year! 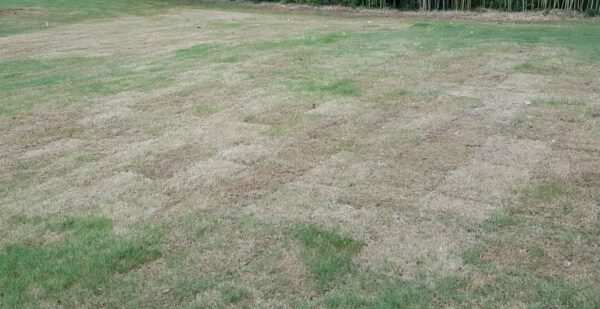 Much like humans, they aren’t big on weeds. They generally prefer the finer texture of certain grasses. We have reports of them causing damage in: coastal bermudagrass, fescue, ryegrass, bluegrass, Johnsongrass, timothy, corn, sorghum, Sudangrass, and small grain crops. I have seen cases where zoysiagrass is less likely to be infested initially but it can be affected over time as pest pressure increases.

How do they move to new areas and is it unusual for them to move so quickly?

Not unusual at all. Remember, the adult life stage of a fall armyworm is a moth. Moths are capable of flying large distances in a relatively short period of time. Many insects exhibit flying behaviors associated with both localized (short) and long-term migration. Female moths fly to an area with an abundant food source (fresh, green turf, for example), lay their egg masses on the flat side of a building, fence, sign, or large leaf, and when the eggs hatch, the larvae drop to the turf below and immediately start feeding.

Are they more of a problem in certain areas?

During “normal” years, fall armyworms are more likely to cause issues in turf that has had some mechanical disturbance, like in areas of new construction. They are generally more of a problem in newly-seeded or sodded areas.

Is there a threshold for fall armyworms?

Because fall armyworms can cause a lot of damage in a short period of time, it is best to treat as soon as you notice activity.

How do I get rid of them?

Managing an insect that has multiple generations per year is tricky because each life stage can appear multiple times. This means that the larval stage (caterpillar), which causes damage, will be present several times throughout a growing season. The first thing you should do when controlling fall armyworms is making sure that the life stage you want to control (larval) is present. Fall armyworms are sometimes active on the turf surface as long as it is not the hottest point of the day. Check the turf in mid-morning or late evening to see if you notice any caterpillars crawling around. If you want to be extra sure, conduct a quick soapy water flush and wait 3-5 minutes to see if anything comes to the surface. You are going to want to apply your insecticides when larvae (caterpillars) are about ½ inch long, ideally. The larger the larvae get, the less effective the insecticide. If larvae (caterpillars) are 1-1 ½ inch long, it may be worthwhile to wait until they complete the rest of their life cycle (pupate and then emerge as adults) before making an application. If you apply control products while they are in the pupal life stage (small, brown-red capsules just under the soil surface (Fig. 2)), they will not be effective. Waiting for them to cycle around again for the small caterpillars to be present will not take long…maybe a week or two. To knock them back quickly, you can apply liquid contact products that contain actives like bifenthrin, lambda-cyhalothrin, carbaryl or trichlorfon (Table 1). For long-term control, products containing chlorantraniliprole (Acelepryn) would be best. With these products, waiting for the caterpillar life stage isn’t as crucial just make sure to go with a liquid formulation whenever possible. 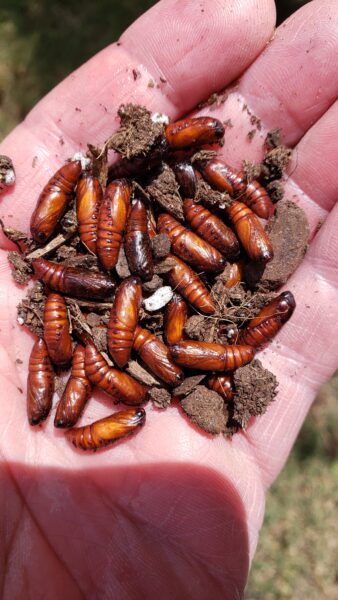 * Products with the trade name “Sevin” can have different primary active ingredients so make sure you look at the label before purchasing!

Link to our Turffiles Pest Info Sheet on Fall Armyworms for more information.