Two-lined spittlebugs are small (less than 1/2 in long), dark brown or black insects with two distinct orange or red lines running across their wings which are held over their back in an inverted “V” or “rooflike” position. The nymphs are smaller and lighter in coloration and can be yellow, green, white or orange. It is often hard to detect or see the nymphs themselves unless you find the spittlemass that they form in the turf canopy which prevents them from drying out. 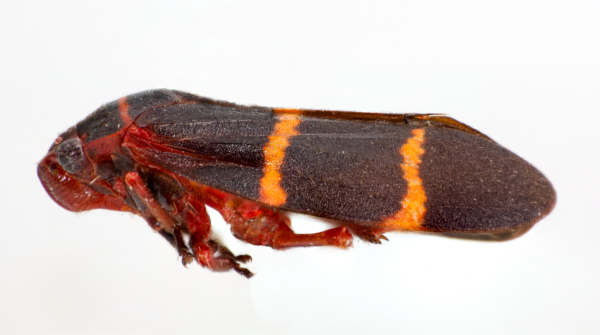 Two-lined spittlebug adults generally cause more damage than the nymphs but rarely require chemical treatment unless populations are very high. Minor damage may include yellowing of some leaf blades but a severe infestation could result in brown patches of dead grass. Centipedegrass is usually most affected by spittlebug damage but large populations will cause damage in bermudagrass as well.

Two-lined spittlebugs are typically active in the late spring and throughout the summer. The adults will jump around the turf canopy and are often the most noticeable jumping on to humans, clothing or furniture next to turf. If you suspect you have a spittlebug infestation, the turf canopy should be closely examined late in the day for activity to determine if treatment is necessary.

Liquid formulations are much more effective than granules. For specific chemical recommendations or additional information, check out the pest info sheet on Turffiles.