Noticing large (>1/2 in), dark wasps hovering in and around the turf canopy the last few weeks (see video)? It’s likely that they are scoliid wasps and can be identified by bright yellow spots on their abdomen and, depending on species, the blue-metallic coloring on their wings (Fig. 1). 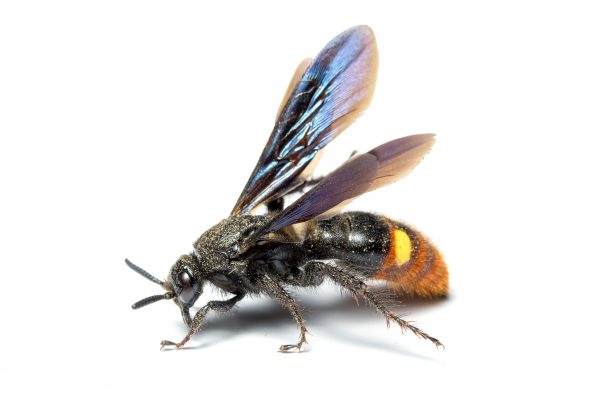 Scoliid wasps are beneficial insects that help control white grubs. At this time of year and at this specific site, they are attracted to a green June beetle grub population. Although scoliid wasps are present in North Carolina from June to October, they are most abundant during the month of August. When a female wasps detects a white grub, she burrows through the soil to find it, sting it and paralyze it. She then lays an egg on the underside of the insect and, once the egg hatches, the wasp larva will feed on the grub.

Scoliid wasps are solitary insects so they do not inhabit a colony, although in August it can be common to see a large number of wasps actively flying at the same time. They are not aggressive and will not sting humans unless stepped on or carelessly handled. Thus, control measures are not needed for these insects, but their presence could indicate a potential white grub issue that may need to be further investigated. It’s a busy time for all white grubs but green June beetles are particularly active and control measures can still be very effective. We recommend applying a carbaryl application by mid-September to control a green June beetle infestation. Remember, green June beetle larvae die at the soil surface so it may be necessary to rake or otherwise remove the larvae from the area following an application.

For more information, check out these pest info sheets for white grubs and scoliid wasps.